These release notes address new features and code fixes for the standard release of SRM (Systematic Rental Management) as of 2019. Notes are categorized as either Enhancements (new components or features) or Corrections (bug fixes).

All changes will be fully laid out in the Help Center, located at www.help.texadasoftware.com, following the release.

Click here to learn more about the technical requirements for SRM.

We have added the ability to send emails from within SRM from an email address distribution list.  You can send emails by branch or by functional area of your business, allowing document and report emailing to appear to be sent from your company, branch or department, instead of a personal email address.  The new functionality works with all documents within SRM that support email, such as A/R statement letters.

The feature is activated in System Maintenance > Configure System Settings > System > Company & Divisions > Company Parameters > Miscellaneous Parameters > Email Configuration > SMTP Configuration tab > Alternate "From" Address Support checkbox.  After checking the box, you must specify the email address that the documents show as being sent from.

The “Alternate "FROM" Address Support” feature activated from the <Company Email Parameters>, has been changed to send outgoing mail from a "shared inbox address" that uses a different “From” address without using a separate password.

We have added a customer comments popup that appears when you select a customer that has notes when creating one of:

or if the customer is changed on one of those document types. The popup appears when you select the customer number. 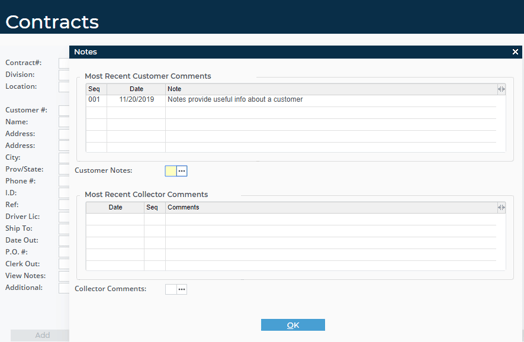 If this permission is not turned on, the popup does not appear for users in that security role.

*IMPORTANT* SUPPORT FOR FAXING WITHIN TEXADA APPLICATIONS IS DISCONTINUED AS OF VERSION 10.1.1909

To our valued customers,

Please note that Texada Software is officially discontinuing support for faxing within our products as of the current date.

As an alternative, SRM features the ability to email documents as attachments, and this functionality will continue to be fully supported in the application.

We thank you for your understanding.

Texada Software is excited to announce the release of Texada Pay for our North American customers!

Use Texada Pay to make your electronic payment processing faster, more accurate, and easier, allowing you to collect payment from your customers with fewer issues.

Texada Pay is an application powered by OpenEdge Payments that acts as an intermediary between SRM (Systematic Rental Management) and your customers’ banking and credit institutions. The application works with debit/Interac; all major U.S. banks; and VISA, Mastercard, and Discover credit cards.

Texada Pay enables you to process a variety of transaction types and share the payment information between devices and software without having to re-enter the information. This decreases the amount of duplicate data entry required for transactions, along with the number of errors resulting from that duplicate effort.

Ticket #SRM-168 - Enhancement - Made multiple improvements to the A/P and G/L Tax Report: