Everything you need to know about inspections in Texada SRM, Web, and Mobile. 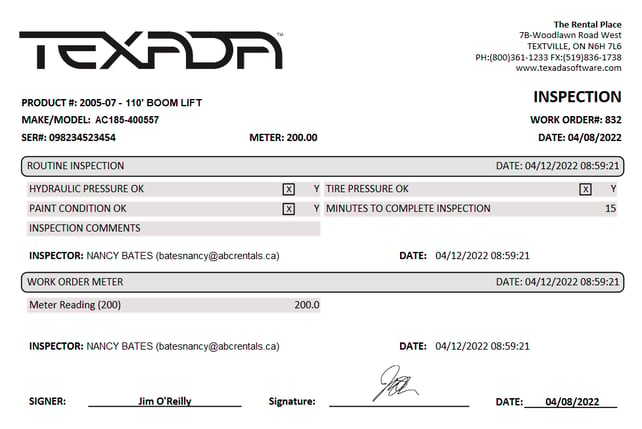 Inspections are a key component of Texada’s functionality, giving field operators a fast and convenient way to report on the condition of the Assets with which they work.

Inspections created in Texada SRM can later be completed in Texada Mobile. Once an inspection is completed for a Work Order or Asset, it becomes a permanent part of that item’s history, which can then be reviewed in SRM/Web. This system promotes transparency between field operators and dispatchers, and provides valuable insights into the state of the Assets in your system.

By phasing out paper inspection forms in favor of digital inspections powered by Texada, you can reduce error frequency, eliminate the need to transcribe inspection forms, and take advantage of the instantaneous communication between Texada Mobile and SRM/Web.

An inspection form being edited in SRM.

An inspection form is a series of questions designed to guide a field operator through the process of inspecting an Asset. Inspection forms are created in Texada SRM, and can either be associated with a Work Order or completed independently (see “Types of Inspections”). Multiple inspection forms can be completed for a single Asset or Work Order, allowing for a high degree of flexibility.

When creating inspection forms in SRM, it is highly recommended to consider the specific needs of each type of Asset, and to customize each inspection form to cater to those needs. This ensures that the inspections carried out by your field operators will cover all the necessary components, while not containing questions irrelevant to the type of Asset being inspected. For example, it would not be useful to have an inspector check the tread condition on a pressure washer.

At the time of creation, the SRM Operator determines which questions are included on the form, and whether each question is mandatory or optional. The Operator can also cause certain behaviors to be automatically triggered when specific responses are given. For example, if a Mechanic indicates that an Asset’s engine is not functional, that Asset can be automatically flagged for maintenance and removed from the available rental inventory.

Once an inspection form has been created in SRM, it can be reused indefinitely.

Inspection forms can be added to Work Orders in a number of ways, both automatically and manually, by dispatchers using Texada SRM/Web and by operators using Texada Mobile:

*This behavior can be enabled or disabled on a per-model / per-group basis in SRM. See “Maintain Inspection Forms” for more information. 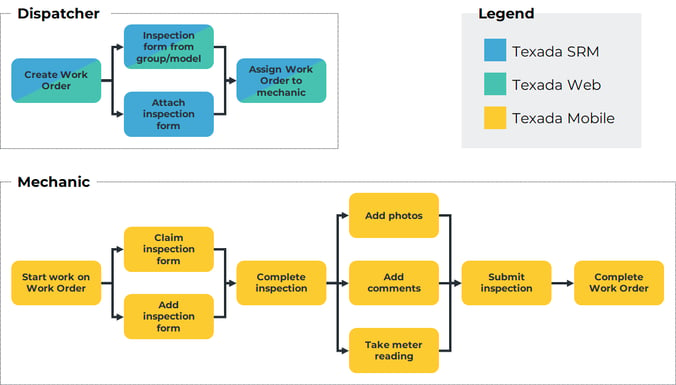 If multiple Mechanics are assigned to the same Work Order, each inspection form will need to be claimed by a Mechanic before it can be completed. Mechanics will automatically be prompted to claim a form when they first attempt to fill it out.

Once all the required fields on the inspection form(s) have been filled out, the Mechanic can complete and submit the associated Work Order. Completed inspections will be added to the inspection history for that Work Order, which can then be viewed in Texada SRM/Web. 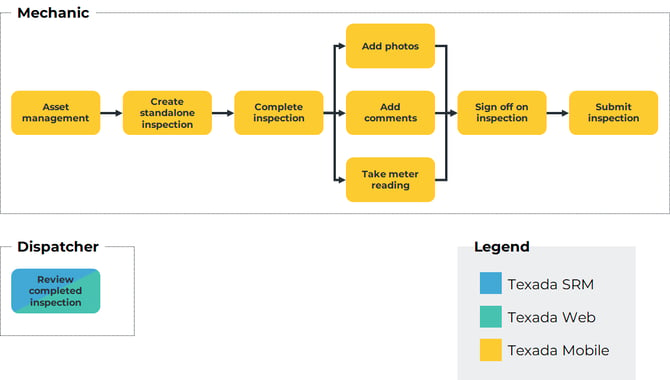 The workflow for standalone inspections begins in Texada Mobile, when a user initiates a new inspection via the Asset Management screen.

Once a standalone inspection is completed, it is added to the inspection history of that Asset, which can then be reviewed by a dispatcher using Texada SRM/Web.

Each inspection form consists of at least one of the following components:

The following section serves as a reference describing the various places where inspections can be viewed, created, edited, and completed in Texada SRM, Mobile, and Web.