Everything you need to know about Instances in Texada Web - what they are, what they are used for, and how to switch between them.

Depending on the way your Texada system is configured, it may comprise one or more different Instances. An Instance is an independent copy of your system with its own data and configurations. Users with the correct permissions are able to switch between Instances in Texada Web.

Depending on the company structure, you may also want to use different Instances for different branches or divisions of your organization. If you would like to learn more about Instancing or how it can be used for your system, please contact Texada support.

The concept behind Instancing is simple. At the core of every Texada system is the database, which contains all of the information the system needs to run: documents, accounting information, Customer and Asset records, configurations, and more. Texada’s various products - Texada SRM, Web, and Mobile, for example - serve as interfaces with which you can view and modify this information.

From a technical perspective, an “Instance” and a “database” are the same thing: each Instance is a separate copy of your system’s database. When you switch Instances in Texada Web, you are switching which database’s data you are currently working with. Think of it as swapping out your computer’s hard drive: the data available to the system is different, but the system itself remains the same.

Diagram illustrating the concept of switching Instances. In the scenario on the left, Instance A is the active Instance, and data from Database A is being used to power Texada SRM, Web, and Mobile. In the scenario on the right, Instance B is the active Instance, and Database B’s data is in use. In both scenarios, the functionality of the products remains the same; only the data used is different.

Switching Instances in Texada Web can be done via the User Menu (click on your name in the top-right corner of any screen). 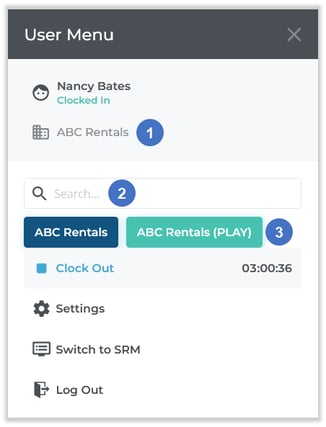 Access to your system’s various Instances is controlled at the User level: each User can be given access to a different combination of Instances in accordance with their role within the company. The only requirement is that each User must have access to at least one Instance.

Only Users with Super Admin privileges are able to edit other Users’ Instances. Additionally, Super Admins can only grant access to Instances to which they themselves have access. See “About Super Admins” to learn more.

To edit a User’s Instances, follow the steps below.