About the Time Tracker

Describes the purpose and the main scenario uses of the Time Tracker function in Texada Web and Texada Mobile.

The time tracker in Texada Web is mainly used for payroll and analytics purposes. It is closely tied to the clock in/out functionality present in both Texada Web and Texada Mobile.

You can record when your operators are starting and ending their daily activities as well as create reports based on this information to determine the strengths and weaknesses of your workforce.

You can export the time tracker information and pass it along to a third-party payroll application, ensuring that your payroll information is error-free. 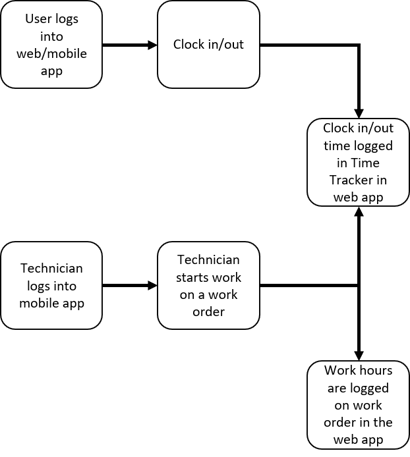 Any user with sufficient permissions can log into the mobile application and manually clock themselves in.  However, if, as a technician, you start working on a work order, you are automatically clocked in as well.

In Texada Web and Texada Mobile, manually, clocked hours apply to the time tracker, and do not have an influence on any other part of the application.

However, in Texada Mobile, if you initiate a clock in by starting work on a work order, then you are automatically clocked in, and your hours are logged in the time tracker.  Those same work hours are also tracked on the work order itself as billable labor.

It is important to note that, while these two sets of tracked time exist side by side in Texada Web, they do not have any influence over one another and ultimately exist independently of each other.

For example, if you update the hours in the time tracker in Texada Web, no updates occur on the corresponding work order, and vice versa.

From the moment these hours enter Texada Web, they are treated as separate sets of information, even though they have the same point of origin.