About Tickets in Texada Web and Texada Mobile

Describes the purpose of and main scenarios for the use of tickets in Texada Web and Texada Mobile.

Tickets are documents in Texada Web and Texada Mobile that indicate that an asset is being moved from one location to another. They are typically a “child” document of a contract that communicates to a driver what needs to move where.

For example, this movement could be at the beginning of a rental transaction, where your customer rents a piece of equipment they cannot move such as a boom lift. Instead, the customer pays you to transport the lift from your yard to their worksite. Your Texada Web counter or SRM (Systematic Rental Management) application user creates a delivery ticket and associates it with the rental contract for the boom.

There are three types of tickets used in Texada Web and Texada Mobile. Use the following table to understand more about each type:

Each ticket has a unique ticket number. Tickets are numbered using the following numbering scheme:

The first half of the number contains the contract number, while the actual ticket number related to that contract is in the second half.

Similar to work orders, tickets use SRM and Texada Web and Texada Mobile to draw out the Texada platform’s full potential. The use of all the applications creates an unbroken workflow from the time the ticket is created until it is closed and the customer is billed. The following diagram outlines the workflow:

Note: Task tickets are the exception to this workflow as they are closed in Texada Web, not SRM and are not billable.

The ticket workflow is composed of seven distinct phases, each with a specific status indicator.  See: “About Ticket Statuses in Texada” for more information about each status.

The workflow is designed to ensure that drivers follow the same sequence of steps for each delivery or pickup they carry out, and that the process is thoroughly documented at all points along the way.

Texada Mobile is closely involved with five out of the seven phases, as indicated below:

When a ticket is assigned to a driver, they can log into Texada Mobile to view the details of the ticket.  In addition, they can add a comment, or flag the ticket for review if there is incorrect or missing information that would prevent the ticket from being carried out, such as an out-of-date address. 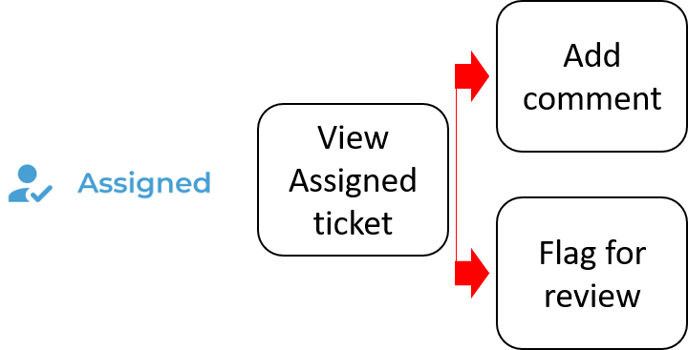 The driver taps the Load Assets button in the mobile application to begin the Loading phase and move the ticket into the Loading status.  As before, the driver can add a comment or flag the ticket for review. Otherwise, they load the individual assets in the application, select the loading status, take photos to establish the pickup/pre-delivery status of the asset.  The driver then taps complete to complete the loading and then taps load complete. This moves the ticket into In Progress status.

While the asset is in transit, the ticket is in the In Progress phase.  At any time during this phase, the driver can add comments or flag the ticket for review. 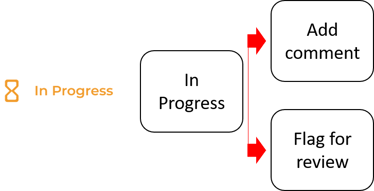 The driver arrives at the delivery or pickup site and taps the Unload Assets button to begin the Unloading phase and move the ticket into the Unloading status.  As with the Loading phase, the driver can add comments, or flag the ticket. When the driver is ready to proceed, they tap the individual assets to unload them and select the unloading status.  The driver then has the ability to take post-delivery photos of the asset to establish the delivery condition. The driver taps Ticket Complete.

The driver taps Complete to move the ticket into the Completed Status, and the workflow in Texada Mobile concludes.

Use the following table to understand each priority level and how it appears in each application:

At most points along the mobile workflow, you have the ability to flag a ticket for review.  You can do this when something unexpected has arisen while carrying out the tickets. For example, if a piece of equipment turned out to be critically damaged when you picked it up, or the customer was uncooperative and delayed your delivery, you can flag the ticket for review.  When a ticket is flagged for review, a flag icon appears next to the ticket in Texada Web, indicating to the counter, or logistics manager that they must have a close look at the ticket.

It is important to note that flagged tickets cannot be moved to the closed status in Texada Web, and must be manually closed in your company’s SRM (Systematic Rental Management) application by an administrator.